Week 8 - Put Yourself in Others’ Shoes to Better Understand Them

Theme of the week: Empathy

The concept of empathy is used to refer to a wide range of psychological capacities that are thought of as being central for constituting humans as social creatures allowing us to know what other people are thinking and feeling, to emotionally engage with them, to share their thoughts and feelings, and to care for their well–being.

As she [Martha Nussbaum] often does, she argued that certain moral truths are best expressed in the form of a story. We become merciful, she wrote, when we behave as the “concerned reader of a novel,” understanding each person’s life as a “complex narrative of human effort in a world full of obstacles.”

Empathy is associated with the ability to put oneself in another person's shoes to better understand their thoughts and emotions, considering the situation they are experiencing. Unlike sympathy, which consists of feeling the same emotions, empathy is linked to a desire to understand others and therefore, to communicate. There are many different theories that define empathy in relation to philosophy, feminism, neuroscience… It is a vast field of study! What interested me when I read about it was the idea that empathy seeks to explain our ability to adopt the other person's point of view in order to understand or evaluate them. That is, to make a judgment on their actions while taking into account the context in which they find themselves. This process takes place in an indirect way, i.e. it is triggered by a situation, an object, a story, or (why not) a work of art. In this sense, the words of the moral philosopher Martha Nussbaum, cited by Rachel Aviv, are revealing: "One becomes more merciful when one behaves like the reader of a novel that views the life of each person as the complex narrative of the efforts of a human being confronted with a world full of obstacles." It is less about projecting yourself into someone else's situation to think about how you would feel in their shoes – which would be more like sympathy –, but rather about imagining yourself in their shoes to better understand them. Thus, the distance between oneself and the other is at the heart of empathy, as one continues to differentiate between one's emotions and thoughts and those of the other. But of course, projection and identification quickly become part of the process, and make it more complex.

With these ideas in mind, I revisited the work of the Leisure collective, composed of Meredith Carruthers and Susannah Wesley, whose works were presented at the Musée d'art de Joliette in the exhibition How One Becomes What One Is, in the fall of 2018. The eight works in the exhibition, created between 2012 and 2018, put forth conversation as a method of creation. Carruthers and Wesley have been having this conversation together since 2004, and they are extending it with other artists, living or deceased, including Constance Spry (1886-1960), Barbara Hepworth (1903-1975), Cornelia Hahn Oberlander (1921- ), Françoise Sullivan (1925- ), Madame Yevonde (1893-1975), Gluck (1895-1978) and Lina Loose (1882-1950).

"We study the lives of others in order to live our own better," wrote historian Joseph Ellis, quoted by Susan Herrington in a book dedicated to Cornelia Hahn Oberlander, one of Leisure's inspirations. This sentence could well be the motto of the duo, who is interested in the life stories of these women for the models they offer; having often refused to choose between and instead embraced everything, including the life of an artist and domestic life, with all the challenges that this implies. If Leisure is interested in these women artists who have worked before them, it is because they feel an affinity with their work and experiences. Each project carried out by the duo involves a preliminary research stage, where they deepen their knowledge of the lives and approaches of the women artists who caught their attention. Leisure’s works are presented as case studies in which they put themselves in the shoes of these women to reflect on their experiences. They set in motion their understanding of the different facets of these women’s experience. This process is reminiscent of a certain understanding of empathy: the artists imagine themselves in the position of these women, they adopt their point of view to better understand their approach to reflection and creation and, subsequently, to fuel their own process.

Two works stand out in relation to my readings: the participatory installation Conversation with Magic Forms (2017) and the video Time Capsule (2014).

To create Time Capsule, Leisure was inspired by the images of Madame Yevonde (1893-1975) , a suffragette turned photographer whose very singular style combined scenery, theatricality, and mythology in the creation of tableaux vivants with sensual and aerial textures. Although she was best known for her portraits, Madame Yevonde also explored the subject of still life. Leisure has revisited Madame Yevonde’s images, borrowing from their aesthetics: the original photographs seem to come to life in a video where the artists visually explore the idea of conversation.

The video was made just as Carruthers and Wesley were about to leave their studio to suspend their practice during a parental leave. This work is, in a way, the culminating point of a line of research that they had pursued until then. It shows the artists exchanging objects from their studio beyond the margins of the image. These objects are associated with their research and the creative worlds of the women who inspire them: a vase of the type created by Constance Spry, some rope, flowers, a bird, insects, domestic objects. The idea of the work is that the artists react to each other's suggestions. To respond adequately, they must try to understand what motivates the other's gesture.

This installation was created following research on the English sculptor Barbara Hepworth. In her book A Pictorial Autobiography, she describes her studio as a jumble of rocks, embarrassing flowers, dirty linen, children and sculptures. A studio in opposition with the austerity of her colleagues’ Piet Mondrian and Ben Nicholson; a studio that she sees as a place of real life, from which she draws joyful inspiration for the creation of her works. In front of a view of Hepworth's studio, Leisure has installed an area dedicated to the creation of plaster sculptures using the sand casting technique. Children of all ages are invited to make their own works, right in the exhibition gallery, which are then displayed on the plinths that are part of the installation.

Both mothers of young children, Meredith Carruthers and Susannah Wesley felt challenged by the experience described by Hepworth in her autobiography. They imagined and reflected on Hepworth's strategies for balancing her life as a mother and her life as an artist, and sought to understand how the presence of children may have influenced her work as an artist. In response, they transposed Hepworth's experience to their own. Their installation engenders the same positive affects: joy and laughter, acceptance of a mess that fuels creation. A mess that disrupted the Museum's usual practices, to the delight of visitors!

Research about women artists plays an important part in Leisure’s creative process; this suggests to me that empathy – adopting others’ point of view to better understand them – is truly at the heart of their approach. 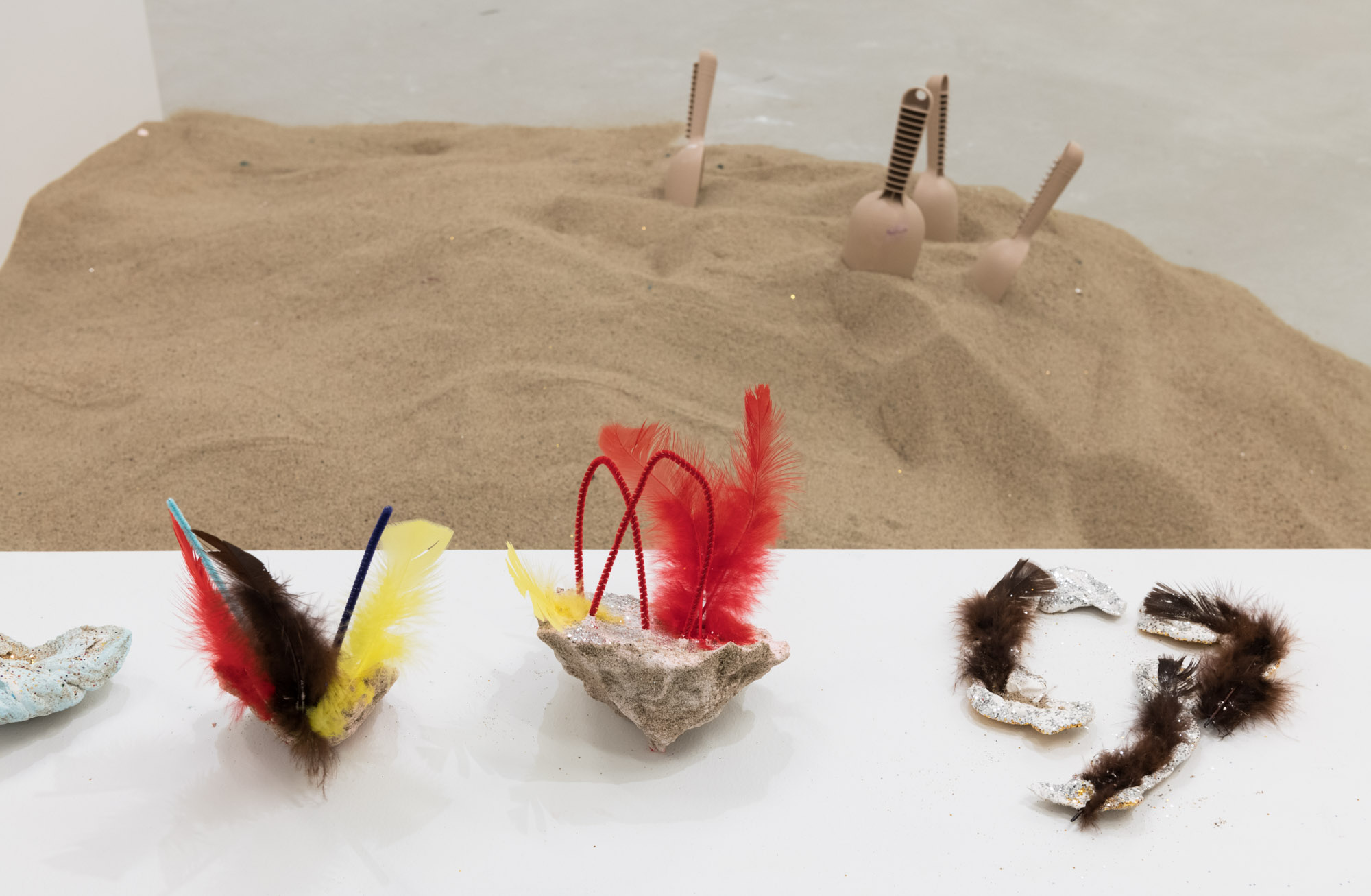 Follow the indications to participate and get your art on this platform.

Announcement of Theme 17 – My Transhistoric Life

Jean-Pierre Gauthier and the birds (theme #15)